Mound Westonka High School senior Lauryn Weninger and ninth-grader Amaija Fields are in New York City this week with cheerleaders from around the nation to perform in the Macy’s Thanksgiving Day Parade. 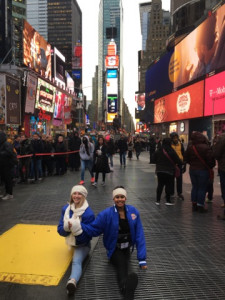 Individual bids to participate in the parade are given out at summer cheerleading camps around the United States. After a day of learning new skills at camp, cheerleaders are put through an evaluation process and are then selected. It is a great opportunity for cheerleaders to travel, represent their school and community and perform as one united team in the parade.

“It is a once in a lifetime opportunity to perform in the biggest, most recognized Thanksgiving event in the nation, and they get to make a lot of new friends and see amazing attractions,” said White Hawks head cheerleading coach Nella Witczek.

Although cheerleaders receive “bids” to participate, all costs are left to the families, so fundraising and sponsoring are important. The trip includes one week in New York, meals, practice, uniforms and other perks like Broadway shows, a Statue of Liberty harbor cruise, Empire State Building admission, Radio City Music Hall Christmas Spectacular tickets, a Subway pass and event “swag.”

This is the second year that MWHS has had cheerleaders qualify for the parade. Last year, four girls—Weninger, sophomore Montana Witczek, sophomore Katy Risvold and ninth-grader Cassidy Jenkins—received bids. Jenkins and sophomore Katie MacDonald also qualified for the event this year. Coach Witczek is looking at the possibility of the team participating in the parade in upcoming years.

Good luck girls, and we hope you have a blast in the Big Apple!