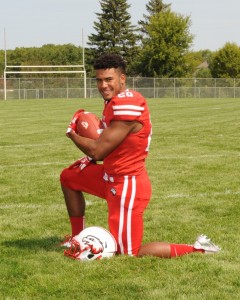 White Hawks head coach Nick David said multiple All-State honors are a “huge deal,” especially when a player is honored two years in a row. “Isaiah​ ​had a great career for us on all three phases—offense, defense, and special teams,” David said. “He ran and caught the ball on offense, and he was versatile enough to play multiple positions on defense. He also did a great job as a punt/kick returner.​”

Cherrier led the White Hawks in almost every statistical category in 2016.​ He finished the season with 736 yards rushing, averaging 7 yards per carry, and 10 rushing touchdowns. He also had 15 receptions for 324 yards and six receiving touchdowns. On defense, Cherrier had 46 tackles, seven tackles for loss, two sacks, two interceptions, and five pass deflections and returned two fumbles for touchdowns. He also averaged almost 37 yards per punt return with three touchdowns.

“We couldn’t have asked for much more out of Isaiah this season or during his varsity football career,” David said​. “He was on the field basically every snap ​this past season and led our team in rushing attempts, rushing yards, receptions, receiving yards, touchdowns and return yards and was third in defensive points.”

“Isaiah has been a mainstay on the White Hawks varsity team ​since his freshman year and leaves our program as the most decorated player in the history of Mound Westonka football,” said David. Cherrier’s numerous accolades include:

In addition to football, Cherrier participates in track and field at Mound Westonka High School. He has committed to playing football at the Division I level next fall at Western Illinois University, where he will major in exercise science.