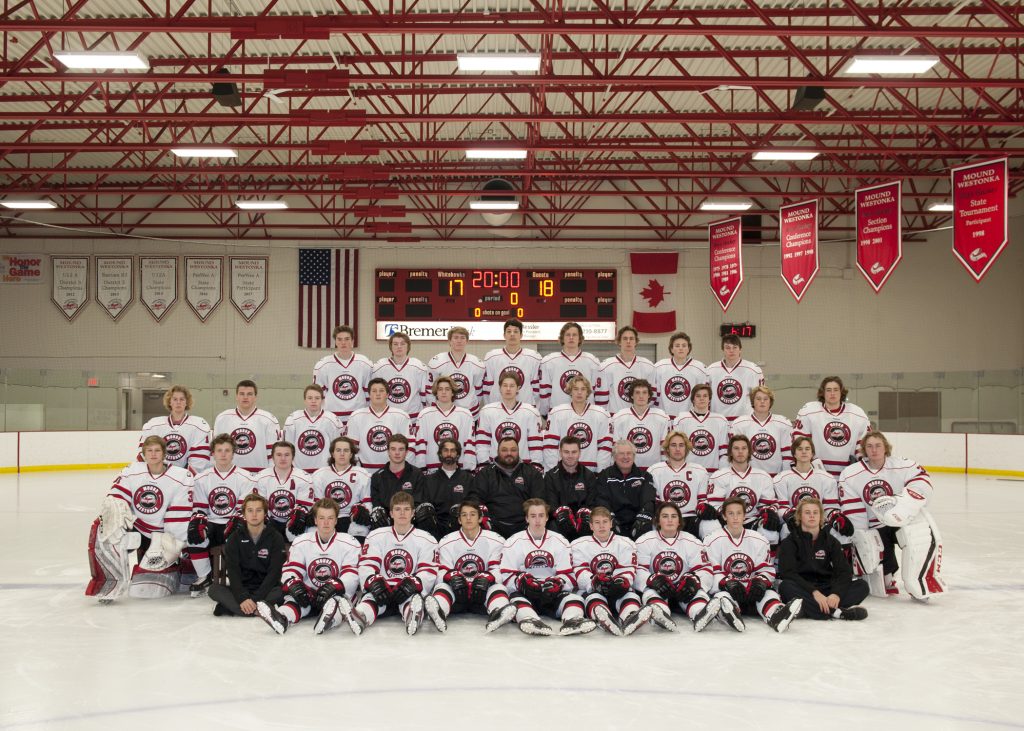 The Westonka Activities Department is proud to name the Mound Westonka High School boys hockey team Athletic/Activities Students of the Week for the week of Jan. 1, 2018. This hockey season has brought new optimism to the White Hawks hockey community, as the boys JV and varsity hockey programs got off to a combined 19-2-1 start!

Many factors can be attributed to the team’s early success, but head coach Jake Hindermann says it all comes down to the players’ daily mentality towards their work, shaping their team identity.

Comments from head coach Jake Hindermann: The boys made a simple decision this summer that process and preparation would be key to their success this season. Once that decision was made, the pursuit of perfecting their craft and strengthening their bodies for the upcoming season was all they wanted to think about.

This type of mentality takes strong leadership, and the White Hawks have it in senior varsity captains Hank Nagel and Torsten Lee, as well as assistant senior captains Philipp Weltin and Trey Courneya. Courneya has been out with an injury, but in his absence seniors Jack LaTour, Michael Lindell and Brady Aufderheide and juniors Aleksi Partio, Luke Holmen and Ethan Fetters-Vandenheuvel have stepped up.

This team is deep, getting production from all three lines and, more importantly, secondary scoring from their defensemen. Leading the way is Nagel, followed by junior Carter Hansen and seniors Owen Mather and Victor Nelson.

Any coach will tell you that putting the puck in the net is important, but no team can have long-term success without strong goaltending, and the White Hawks are getting it from senior Cole Broome and junior Noah Coley. The two have combined for a goals against of 2.18 per game and a 90 percent save percentage. The team is averaging 4.36 goals per game. If this trend continues, the boys hockey team could be looking at having an incredible season!