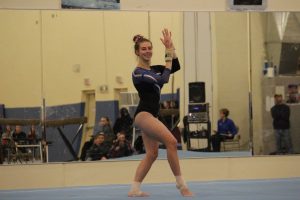 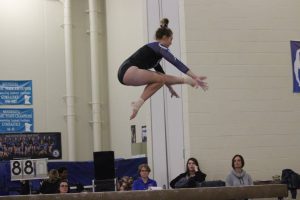 The Westonka Activities Department is proud to name Mound Westonka High School junior Teagan Schmidt Athletic/Activities Student of the Week for the week of Jan. 15, 2018. Schmidt is a member of the Watertown-Mayer/Mound Westonka gymnastics team, which is currently ranked fourth in state.

“[Schmidt’s] leadership, dedication and gymnastics abilities make her the No. 1 pick for the athlete of the week for Mound Westonka,” said head coach Steven Hangartner. “The gymnastic team finds itself ranked fourth in state mainly because of Teagan’s ability to lead a team.”

In addition to the commitment she shows during practices and meets, she has hosted off-season get togethers, including swim parties, community activities and fundraisers.

Schmidt’s dedication to the sport has helped her overcome nagging injuries. Last week, she was able to compete in three of the four events at the Watertown Invitational. She scored a 9.5 on the floor exercise, 9.3 on the beam and a 9.0 on the bars to help defeat previously undefeated AA school Apple Valley.

“It is of great honor that we recognize Teagan as athlete and student of the week,” Hangartner added.