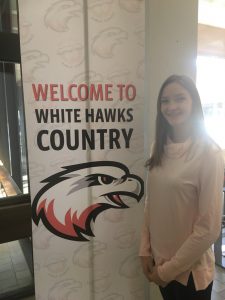 Mound Westonka High School is proud to name senior Jennifer Schaible as this year’s Athena Award recipient. Candidates for this “outstanding female athlete” award must demonstrate excellence in individual or group sports. Schaible has been a standout athlete on the White Hawks basketball, volleyball and softball teams throughout her high school career.

“Jen Schaible has been an outstanding female athlete and role model for our MWHS and younger athletes,” said Westonka Activities Director Jeff Peterson. “Her work ethic is second to none, and her ability to lead by example, encourage others, hold others accountable and demonstrate selflessness is what makes her a great teammate.”

As a five-year starter for the MWHS girls basketball team, Schaible earned multiple Wright County Conference awards. The White Hawks captain was named Honorable Mention All-State this past season and plans to play basketball at the University of St. Thomas next year, pursuing a career in the medical field.

One of Schaible’s favorite high school sports memories was reaching the 1,000 career points mark in her junior year of basketball. She was the first player in school history to reach that milestone as a junior.

“While scoring was fun, the best part of this night was what my teammates did for me,” Schaible said. “Little did I know, after school that day they had gotten together and made posters for me that I still have to this day. It was uplifting to see all of my teammates and people of our community come together to see my accomplishment.”

Schaible also earned All-Conference and All-State honors as a member of the White Hawks volleyball team. She began starting on the varsity team as a ninth-grader and was a two-year captain. As a senior, she was ranked among the best in the state for blocks and digs.

“High school athletics have helped to shape me into the young woman I am today,” Schaible said. “They have taught me how to deal with hardships in ways I would not have learned anywhere else. Sports have taught me how to be a competitor yet show grace in times when it is needed. Overall, I have become a better leader and matured faster because of sports.”

Schaible will represent MWHS at the 47th Annual Minneapolis Athena Award Luncheon, which will be held May 3 in Bloomington. She will be one of more than 50 outstanding senior women honored from public and private high schools in the greater Minneapolis area. To learn more about the event, visit http://minneapolisathena.wix.com/minneapolisathena.