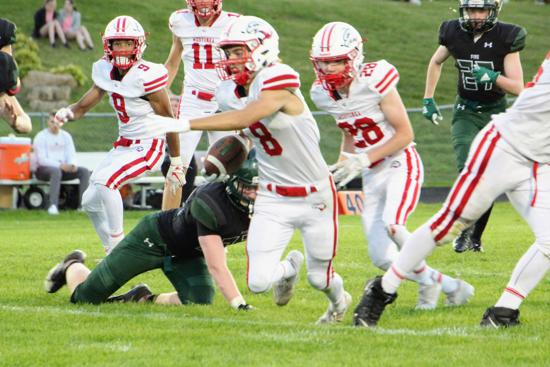 Tyler Von Bank and a suffocating team defense led the way for the White Hawks in their 29-8 season-opening road win over Holy Family Catholic in Victoria. The sophomore quarterback was responsible for all of his team’s four touchdowns in the dominant Week 1 win against the Fire Thursday night. Like most first games of the season in high school football, turnovers were an issue, but his coach was impressed with how he bounced back.

“Tyler has continued to grow as a QB and team leader with each rep in practice and opportunity that he has gotten,” Mound Westonka Head Coach Nick David said. “We told the boys before the game that there were going to be moments in which each of them would fail, but it is how they responded in those moments that truly matter.”

Von Bank would start off the scoring with a four-yard touchdown run in the first quarter. In the second, he went to the air, finding junior running back Tucker Anderly on a 13-yard pass and catch, sending the White Hawks into the break with a 14-0 lead.

In the third quarter, Von Bank threw a 4-yard TD pass to senior running back Adam Nobs to extend the lead to 21-0. Nobs was solid rushing the ball for Mound Westonka as well, picking up 89 yards on 13 carries, along with five receptions for 32 yards.

“Adam did a great job running and catching the ball. I have not had a lot of guys who have worked harder during the offseason to improve themselves in my eleven years of coaching as Adam, so it was great to see him have the success that he did as he has earned it,” David said.

Von Bank would cap off the night on the ground, punching in a one-yard score in the final period. All told, the White Hawks signal caller completed 17 of 24 passes to seven different receivers, for 112 yards and 2 TDs. Von Bank also picked up 40 yards on nine carries, with two rushing touchdowns.

David credited the line for a successful night on the offensive side of the ball. “Zac Babb, Isaiah Dempsey, Matt Hoh, Jack Bullock, Michael Nolen, Lance Munsterteiger, Danny Murphy, and Nick Stanberry did a great job of opening up holes throughout the game and pass protecting up front.”

The Mound Westonka defense held firm for most of the game, giving up just 79 total yards.

“We knew going into this season that this was going to be one of the fastest defenses that we have ever had here, and they proved that on Thursday night. Our secondary were ballhawks. Our front seven did a tremendous job up front controlling the line of scrimmage while keeping gap integrity. Any time that you can hold a team to four first downs and force three turnovers it is a great night for the defense.” Holy Family avoided a shutout with a four-yard TD run by Nick Hendler in the game’s final period.

View photos of the game by Sue Rodelius.