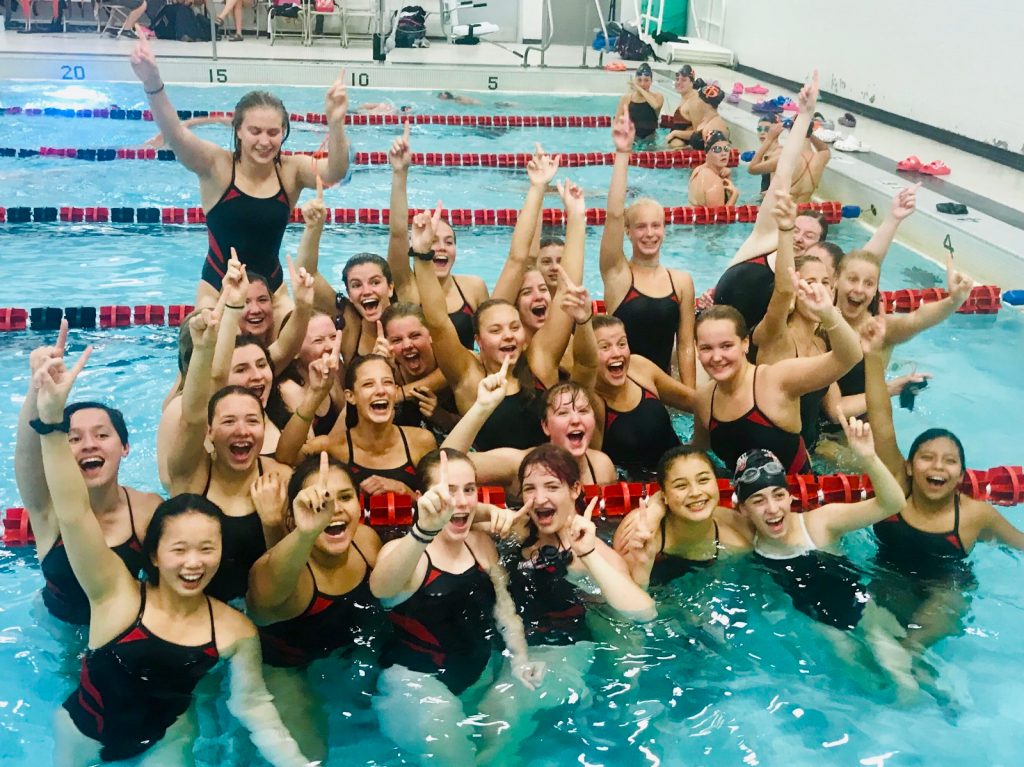 The 2019 Mound Westonka-Holy Family girls swim and dive season has started with a 2-0 conference record. The team hosted Litchfield on Aug. 29 and swam away with a 105-72 victory.

Next, the team would host Delano. Delano has been known to have a team of great depth and continues to be a top contender at the varsity conference and state meets every year. The White Hawks had recently competed against Delano at the Tim Daly Invitational and fell short to them by a mere 21.5 points.

The White Hawks got another chance to take on Delano on Sept. 5. Going into the meet, coach Ben Hanson told his team that this would be a close meet and that everyone would need to step up and swim/dive their best. He predicted that the White Hawks would win by two points if everyone got the points he needed them to get. His prediction was not far off! The White Hawks took down the Delano Tigers for the first time in many years, winning the meet with a score of 96-90!

Starting off the meet with a second-place finish was the 200-yard medley relay team of senior Annabelle Elsner, sophomore Hannah Hall, sophomore Annie Springer and ninth-grader Jaylyn Storm. Ninth-grader Zella Lucas won the 200 freestyle by out-touching Delano’s Kylie Strobl by 0.22 seconds with a time of 1.58.38, followed by sophomore Ellen Ries (third) and senior Grace Hanson (fifth). Elsner took the win in the 200-yard IM with a time of 2:18.41, followed by Springer (third) and senior Rebeka Knoll (sixth). Storm took second place in the 50-yard freestyle with a time of 25.49, followed by junior Alyssa Bourdon (fourth) and sophomore Kathryn Collins (sixth).

The team needed a strong showing from the divers, and they succeeded by sweeping the field with the first- and second-place spots. Eighth-grader Phoebe Johnson won the diving event with a score of 173.60, and senior Emilene Loehr came in second place with a score of 164.90, giving the team another 10 points.

Heading into the second half of the meet, the score was tied 39-39. Springer won the 100 butterfly with a time of 1.01.85, followed by junior Ava Kittelson (fifth) and Storm (sixth). MWHF took third (Ries), fourth (Bourdon) and sixth (Kathryn Collins) in the 100 freestyle. The team swept the 500-yard freestyle with the first- (Lucas), second- (Hanson) and third-place (ninth-grader Kristin Collins) spots. The 200 freestyle relay team of Storm, Springer, Bourdon and Lucas placed second. MWHF took second (Elsner), third (Kittelson) and fourth (Kristin Collins) in the 100-yard backstroke. Newcomer ninth-grader Kate Johnston won the 100-yard breaststroke by out-touching Delano’s Megan Benker by 0.04 seconds with a time of 1.14.66, followed by Hall (fourth) and seventh-grader Annemarie Johnson (fifth).

Heading into the final event of the evening was the 400 freestyle relay. The White Hawks were tied with Delano, 86-86. Relays score points for the top three places (8-4-2), meaning that the team who got first place would win this particular meet. The crowd was loud, and you could feel the excitement in the air. MWHF took first and third place! The winning relay team of Lucas, Ries, Kittelson and Bourdon had over a 7-second lead over Delano with a time of 3:45.82.

This was a big win for MWHF, and it’s a great start to a promising season. The team will head to Hutchinson on Thursday, Sept. 19, to take on the No. 1-rated team in the conference. Good luck, ladies!