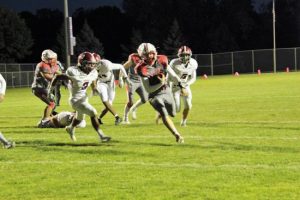 Sophomore quarterback Tyler Von Bank turned in his best game of the season in Mound Westonka’s 42-7 Homecoming victory over the Richfield Spartans this past Friday night.

The White Hawks signal-caller was responsible for five touchdowns – three on the ground and two through the air – finishing the game with 7-12 passing for 91 yards, and 63 yards rushing on ten carries.

“We have been really impressed with Tyler’s growth thus far this season. Though he made a few throws that he definitely would have liked to take back, by the time he got to the sideline he knew exactly what he had to fix moving forward so it wouldn’t happen again,” Mound Westonka head coach Nick David said.

Of course, the White Hawks defense put in a masterful effort, repeatedly giving the offense a short field to work with. The success of the defense is best expressed through the lack of yards gained on offense – Mound Westonka needed only 248 yards from scrimmage to score six touchdowns.

“Playing on a short field throughout the entire game offensively is a testament to both our special teams and our defense. Our defense was able to get a lot of three and outs and our special teams came up with some very big returns thus giving us excellent field position. It was great though to see our offense finish some drives with more consistency than past weeks,” Coach David said.

The win moves Mound Westonka to 5-0 on the year, as they prepare for their toughest stretch of the regular season.