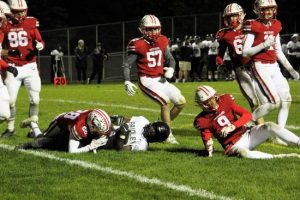 Mound Westonka’s undefeated season came to an end Friday evening, losing 31-6 to the No. 6 team in AAAA, the Fridley Tigers.

Behind a dominant performance by senior quarterback Kaleb Blaha (207 yards passing, 3 TDs, 66 rushing yards), Fridley moved to 6-0 on the year.

The White Hawks fell behind 17-0 in the second quarter before scoring on an interception return for a touchdown, a 28-yard take back by senior defensive back Noah Lietzau, to make the score 17-6 towards the end of the quarter. Unfortunately, Fridley was able to capitalize on a short field due to a short kick-off and go into halftime leading 24-6.

“You learn a lot about your team during games like this,” head coach Nick David said. “We knew coming into this game we were going to have to turn in our best performance of the season to come out on top, and that just did not happen. With that, we now have a better understanding of the quality of opponents that we are going to face later on in the season during the playoffs and how well we are going to have to play in order to win.”

Mound Westonka faces another tough opponent this week on the road, taking on the defending state champion SMB Wolfpack, currently 6-0 and ranked No. 1 in the state in Class AAAA. This game has huge playoff implications as well – it decides who the 2019 Twin City Maroon Subdistrict Champion will be.