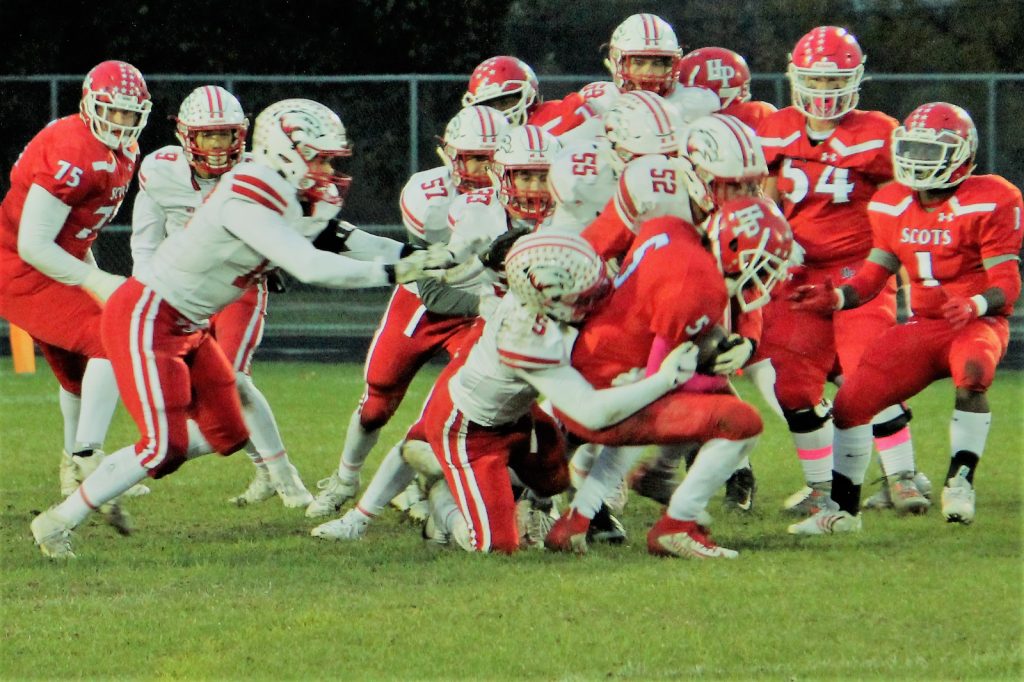 You can’t win them all, but you can give the reigning Class AAAA state champion headaches with a stellar defensive performance.

That’s what the Mound Westonka White Hawks pulled off in Week 7, falling 20-3 against the top-ranked SMB Wolfpack, before securing a 33-15 win and 6-2 regular season record against St. Paul Highland Park last Wednesday.

The defense was able to frustrate SMB… holding star quarterback Jalen Suggs to less than 70 yards rushing and a little over 100 yards passing, sacking him six times. Mound Westonka entered halftime down only four points before the Wolfpack stirred in the second half.

“We look at every challenge we face as an opportunity to grow as a team. We have had the SMB game circled all season as there is nothing more fun than playing the number one ranked team in the state in hopes to pull off an upset. We also knew that playing SMB during the regular season would better prepare us for the playoffs. I was really pleased of how hard the boys worked during the week to prepare for this game, but even more so with the intensity that they brought all night. We feel that if we can play with SMB, we can play with anyone in Class AAAA,” head coach Nick David said.

The team’s final test of the regular season was another road game, a dominant win over the Scots of St. Paul Highland Park.

Tucker Anderly, Trent Bowe and Tyler Von Bank all ran for 40+ yards. Von Bank threw for two touchdowns, leading his team to a 19 point explosion in the third quarter, that included field goal and a safety.

“Though you always want to win them all, we are pleased with how the regular season finished out with our two losses coming to two very talented Class AAAA top ten ranked teams. Going into the season we made a goal that we wanted to start the season strong and end the season strong and that is exactly what we plan on doing as we enter the playoffs. Our defense has the ability to keep us in every game that we play and our offense continues to evolve and improve with each week,” David said. “We are really excited to get the second season going!”

UPDATE 10.25.19 – The White Hawks defeated Minneapolis South 56-0 at home on Oct. 22 in the first round of playoffs. They move on to play SMB at Blake High School in the Section 5AAAA Semifinals this Saturday, Oct. 26. Game time is 7 p.m.