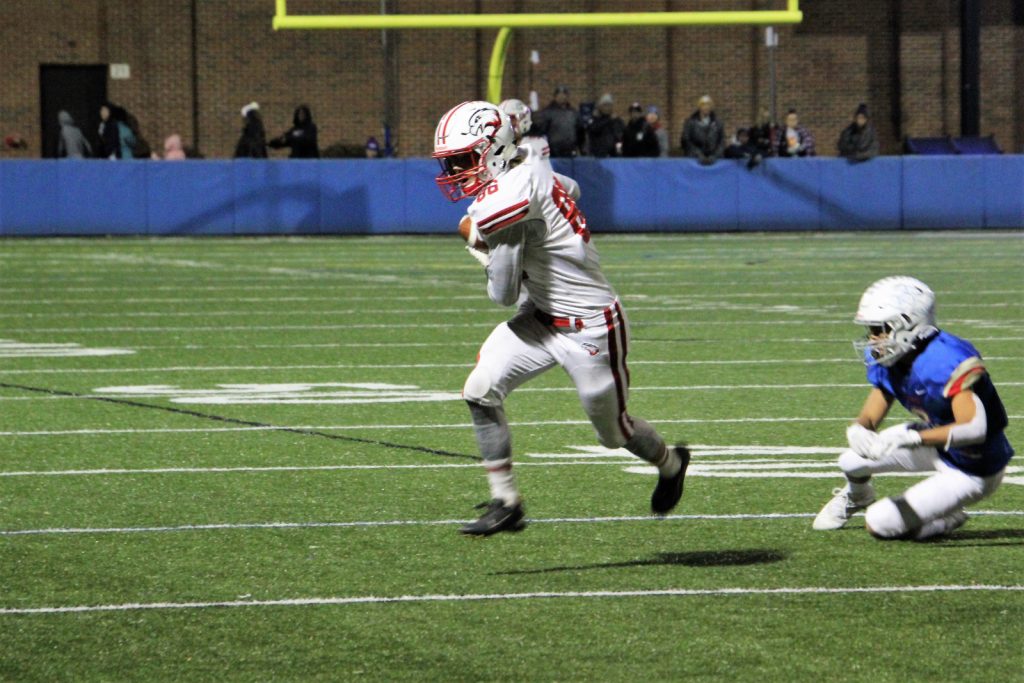 The Mound Westonka White Hawks football team just may have played their best football in the playoffs, crushing their opening-round opponent 56-0, then hanging tough against the defending Class AAAA state champion that is stacked with Division I talent.

In the end, the Section 5AAAA Semifinal game last Saturday, Oct. 26, against the SMB Wolfpack (St. Paul Academy/Minnehaha Academy/The Blake School) would end in a 35-14 defeat. But giving the juggernaut a run for their money will likely be remembered much more than the score.

“We played some of our best football of the season in our two games against SMB. Schematically we did some things that we felt they hadn’t seen all season, which seemed to cause some frustration on their end,” said White Hawks head coach Nick David. “We also tried to create some personnel mismatches by moving some of our players around. Ultimately, they are a very talented team with one of the best high school athletes in the country in Jalen Suggs. When we were able to stop something on their offense, Suggs seemed to consistently make something else work for them.”

The White Hawks put SMB on notice early, blocking a first-quarter field goal, which was returned 74 yards for a touchdown by senior Noah Lietzau, giving them a 7-0 lead.

Suggs, the Wolfpack’s star quarterback, got his team going from there, starting with a 38-yard TD run to tie things up going into the second quarter. It would be 21-7 at the break.

Mound Westonka sophomore quarterback Tyler Von Bank got the scoring going in the third, hooking up with junior Trent Bowe for an 18-yard touchdown, and cutting the SMB lead to 7.

Suggs would not be stopped, however, rushing for a 64-yard TD and throwing a 58-yard score to end things. He would rush for 199 yards on the night, to go with 130 yards passing, four total touchdowns (not to mention two interceptions on defense).

“Suggs is the best player I have ever seen or coached against at the high school level,” coach David said. “At any given moment, he can score a touchdown by making people miss with his running ability or by throwing the ball deep down the field. Being able to play and coach against a talented athlete like Suggs has really given us some perspective and ideas for when we need to prepare for high end talent in the future.”

Mound Westonka was intercepted twice deep inside the Wolfpack red zone. Coach David said, “We can’t expect to win against an opponent that’s the favorite to win the Class AAAA state title when we miss scoring opportunities like we did. SMB scored touchdowns off each of those interceptions, which in reality is a 28-point swing. If we capitalized on both of those drives with scores when we were inside their 10-yard line, the outcome of the game would have been much different.”

Still, the season will be seen as a success, as the White Hawks finish 7-3, with all losses coming to highly-ranked Class AAAA teams. They finished the regular season 6-2 and picked up a 56-0 playoff victory against Minneapolis South. In that game, the team dominated on the ground, racking up nearly 300 yards rushing.

“Coming into the season we set a goal that we were going to start strong and finish strong and that is exactly what we did. We played great football at the beginning of the season, starting the year off 5-0, and we played our best football of the season late into the playoffs,” David said. “I couldn’t me more proud of the growth that this team has made throughout this season. We had a lot of new starters at key positions coming into the season and they all stepped up and played great!”

“This group of seniors is a special group and will be missed,” David added. “We have not had another group of seniors since I have been here approach practice and game planning the way that they have, which is much of the reason that they have been a part of 29 wins in their four seasons of high school football. I have no doubt that they all will find a tremendous amount of success as they move on in life.”