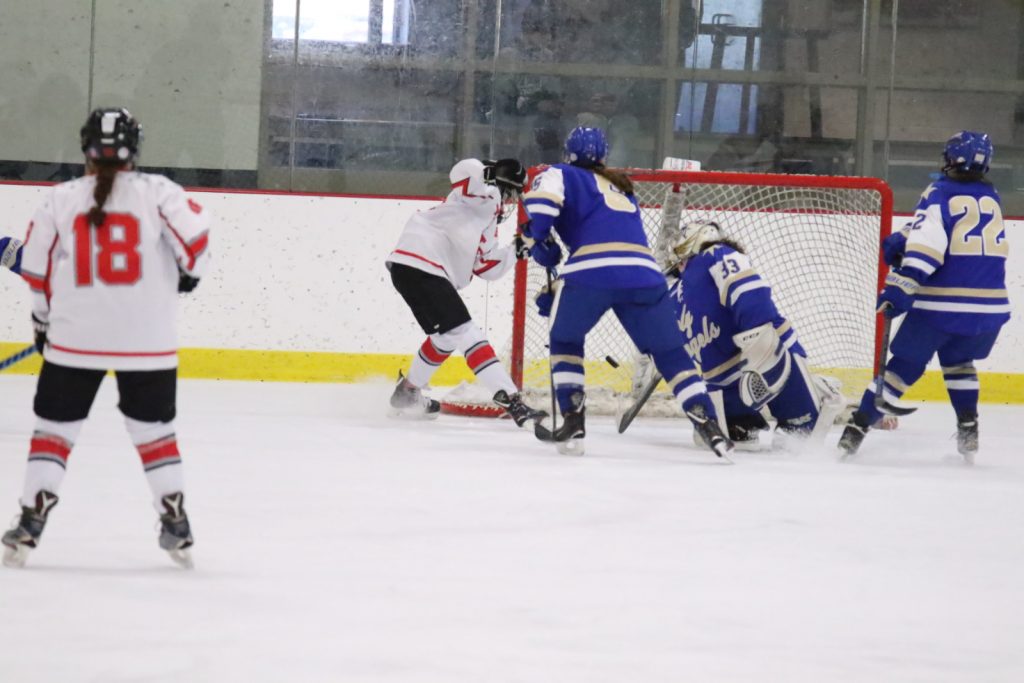 The Mound Westonka/Watertown-Mayer/Southwest Christian girls hockey team got back to its winning ways with a 3-1 home victory over Holy Angels Nov. 23 at Thaler Arena. It was the White Hawks’ only game of the week because they had to postpone Tuesday’s game at South St. Paul due to an illness that ran through the team following their overnight trip to the Rochester area.

Against the Stars, the home team fell behind 1-0 midway through the first period when a shot from the top of the circles slipped by senior goaltender Sara Larson. Less than two minutes later, junior captain Brooke Pioske’s shot from the point was deflected by a stick and found its way into the goal to tie the game up. Eighth-grader Alexa Niccum had the assist on the goal.

During the intermission break, White Hawks assistant coach Jim Kurtz stressed defensive placement and backchecking to the players, while co-head coach Claire Goldsmith went over some offensive adjustments. The players took the advice and adjustments to heart and outshot the Stars 21-2 in the second period, taking the lead on a nice passing play from sophomore Kailey Niccum to ninth-grader Gretta Pioske. While the White Hawks dominated in shots, they only put the one goal behind the goaltender for the Stars, who was outstanding all afternoon.

The third period saw the home team continue to dominate play and come close several times to scoring. But it wouldn’t happen until sophomore Bella Peterson put a wrist shot into the empty net to seal the 3-1 victory.

After only outshooting the Stars 13-12 in period one, the final totals were 42-18 in favor of the White Hawks, showing their dominance in periods 2 and 3. The “hard hat” winner for the game (given to the player who gives great effort) was eighth-grader Camryn Hargreaves, who anchors the third line and plays well on both ends of the ice.

The White Hawks return to action at home on Friday night, Nov. 29, when they host Fergus Falls. It is also Grandparents Night. The Otters are coming off a visit to last year’s state tournament, where they brought home the consolation trophy.

Come out and cheer on the White Hawks!

View photos of the game by Kris Farwell