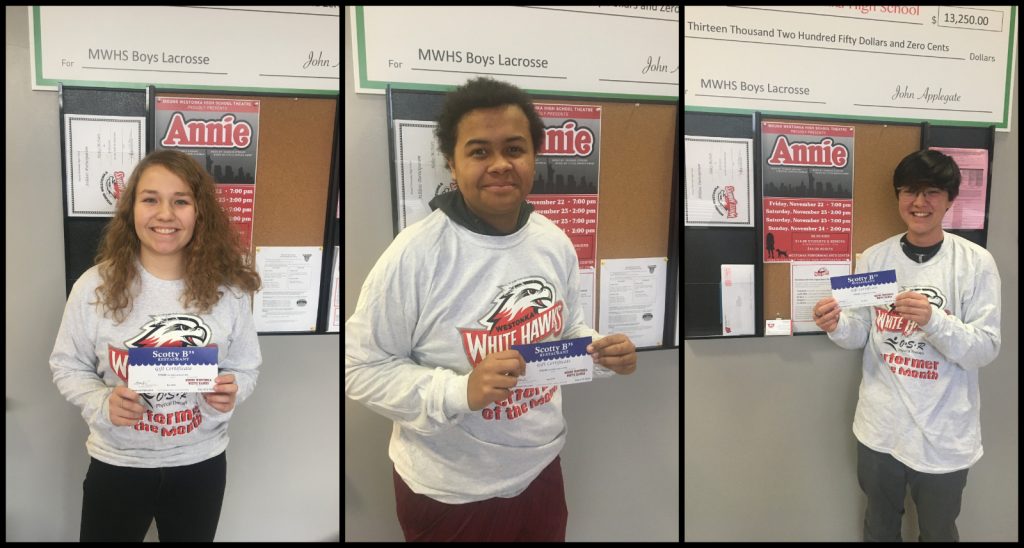 The Westonka Activities Department is proud to name Mound Westonka High School students Mackenzie Wallace, Josh Nkhata and Merrick Gormley as Athletic/Activities Students of the Week for the week of Nov. 25, 2019.

Wallace took on the role of stage manager for this year’s fall musical, “Annie.” This was a new role for her, and MWHS staff said that she was “absolutely amazing,” adding:

She is present, attentive, and hard working. She gives 110 percent at every rehearsal. Mackenzie is open to notes and how to make things better; she works with her crew and the entire cast to make the production of ‘Annie’ a smashing hit!”

As we entered tech week, Mackenzie has been motivated, enthusiastic and encouraging to her crew and cast. She is diligent and responsible. Her biggest leadership trait is her communication – she is constantly ensuring she is clear and consistent with her communication. The directors would not be able to have the production we have without Mackenzie!  We are so proud of her and all her hard work!
From the beginning of “Annie” rehearsals in September, Nkhata has been a consistent actor. He takes notes and works to improve his skills. He is recognized as a leader in the group, he is on time and is only absent when sick. MWHS staff said, “Josh has worked hard at his roles in the musical. We are so proud of Josh and this musical would not be possible without his leadership!”
MWHS staff said that Gormley was “amazingly prepared” for all rehearsals leading up to “Annie” and was a great leader in the cast’s long rehearsals. MWHS staff said, “He is an outstanding player who is very modest and continually strives to be better by asking good questions and putting in the time to improve.”