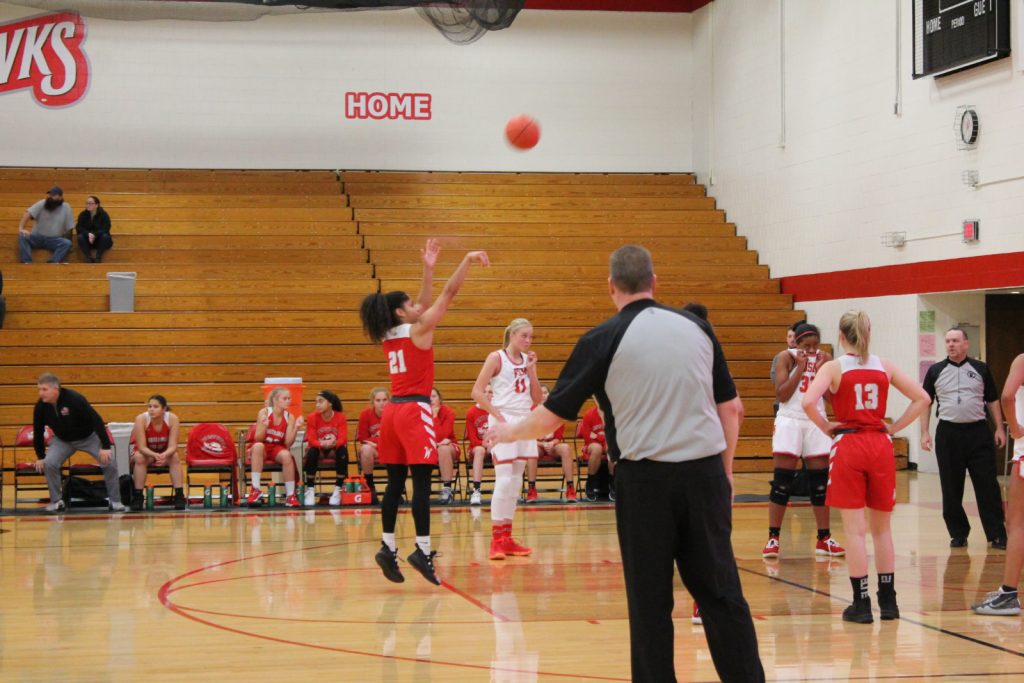 The month of December was a busy one for the White Hawks girls basketball team. On Dec. 10, the team played against a tough opponent, the Orono Spartans, and, with an injured junior Greta Blanck watching from the sidelines, were defeated after an early lead in the game. The next two games went down to the wire! With Blanck back, and an impressive drive down the lane and go-ahead layup by senior Makala Shelton, the White Hawks defeated Visitation. The second game was also close-scoring and went into overtime but ended with a loss to Bloomington Kennedy.

Shelton leads the team in scoring with an average of 18.2 points per game. The team is well-rounded, boasting many key contributors. Senior Melissa Drill leads in the rebounding column with 8.2 per game, followed by Blanck and Shelton with 5.7 per game. Sophomore Megan Wanner leads in assists with 26, with senior Sam Otto and junior Sydney Eidsness each with 20.

Benilde St. Margaret’s came to town the following week. They pushed the White Hawks into a fast-paced game and came out on top. New London-Spicer was the next foe for the White Hawks. Westonka caught No. 4 New London off guard in the first half and stuck with them throughout. Drill hit an impressive 3-point shot at the halftime buzzer, giving the White Hawks the lead, but the Wildcats made some adjustments and came out strong to pull ahead for the win. Despite the loss, the team was energized by being only the second team this season to score over 50 points against the Wildcats.

The White Hawks junior varsity team continues its success as well. The team has an overall record of 8-3. The C-Squad team is now 9-1. Both teams are improving each game and working effectively as a team. The future for the White Hawks looks bright.

This past week, the White Hawks hosted the Holiday Jamboree and opened with a prominent win against Columbia Heights. Unfortunately, the weather led to cancellation of the rest of the games.

When asked to reflect on this month’s play, coach Alan Hiebert said, “Our team has competed hard in each game this season. When we get balance like we did vs. Columbia Heights with four kids in double figures and solid contributions from everyone in the lineup, we’re a tough team to beat. Conference play starts after the holidays, and we’re looking forward to going up against our familiar foes.”

After hosting many home games this month, the team will be on the road most of January, but you can see them in action home vs. Litchfield on Jan. 24 for Youth Night.