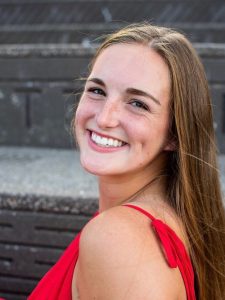 Mound Westonka High School is proud to name senior Melissa Drill as the 2020 recipient of the Athena Award. Candidates for this “outstanding female athlete” award must demonstrate excellence in individual or group sports. Drill is a three-sport White Hawks athlete, participating in volleyball, basketball and softball.

“Melissa is a great representative of what the Athena is and means, as she is a student-athlete with great character and high work ethic,” said Activities Director Jeff Peterson. “We are proud of her current and past accomplishments and are excited to see what her future holds.”

“Varsity athletics have taught me so much about accountability, time management, relationships, leadership and hard work, which are life skills that I am forever grateful for,” said Drill.

A four-year letter winner of the volleyball team, Drill received All-Conference Honorable Mention her junior and senior years and Spotlight on Scholarship awards in three years. She was also named captain her senior year.

Drill says many of her favorite high school sporting memories took place off the field. In volleyball, she fondly remembers DARE night her ninth-grade year and spending time with the upperclassmen that she admired so much. “Being with my teammates off the court made us connect in such an impactful way,” she said. “Lifelong friendships were created that would not have happened on the court.”

In basketball, Drill was named captain her senior year and hardest worker her junior year. She also earned two Spotlight on Scholarship awards. Her favorite basketball memory was winning a home section game last year, which capped off a successful season.

Drill is a leader on the softball team, where she earned All-Conference honors for three consecutive years. She was also named Team MVP her sophomore and junior years and earned a pair of Spotlight on Scholarship awards. She was elected captain her junior and senior years.

Making it to the section finals the past two years is a highlight of Drill’s softball career. “Although we had heart-wrenching losses, we still proved that we were a strong team,” she said.

Drill is grateful for the help of her teammates along her journey, especially since she started participating in sports at a young age. “The upperclassmen really helped me through a lot,” she said. “I hope that I was able to help the younger members on my teams just by being a friend, because there is a lot of stress and pressure that comes along with competing at this level, and it is hard to go through it alone.”

Melissa is the daughter of Steve and Mara Drill of Mayer. She plans to attend Winona State next year, where she will pursue a double major in biology and chemistry with a minor in Spanish.

Drill will represent MWHS at the 48th Annual Minneapolis Athena Award Luncheon, which will be held May 8 at the DoubleTree by Hilton Hotel in Bloomington. She will be one of more than 50 outstanding senior women honored from public and private high schools in the greater Minneapolis area. To learn more about the event, visit http://minneapolisathena.wix.com/minneapolisathena.