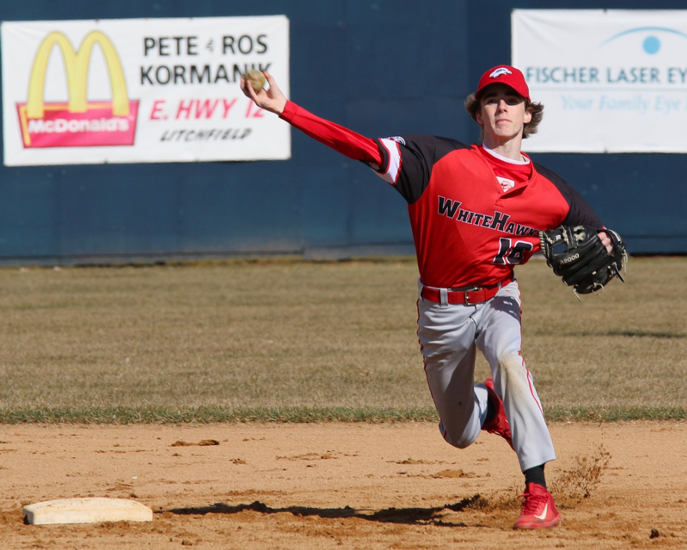 Throughout my life, sports have been my everything. Some of my first memories growing up are me throwing a football or playing catch with my dad. As I got older, they just became bigger to me. I was very small compared to all the other kids my age so it made me want to push myself more so I could compete with them. I would watch film from professionals and I would learn even when I was off the field, but now it’s all over. Your senior year is supposed to be the cherry on top, maybe even playing well enough to play collegiate ball. I finished my Junior seasons on a high, I was playing well and I couldn’t wait for my final season in a White Hawks uniform.

In the fall I play football, winter I wrestle, and finally, in the spring I get to play on the diamond. My fall season was going perfectly. I was excelling and playing the best football I ever have. It was the second half of the season and we were playing the defending state champions. This was the game we had all circled on our calendar. I was looking forward to this game since the schedule came out. I wanted to prove that I could hang with these Division 1 athletes. On the second defensive drive, the 30th play of the game. My life changed forever. I went to make a tackle and in the process I got rolled up on, breaking my ankle and ending my senior season. The entire ride to the hospital I couldn’t stop thinking about what my future was going to look like now. I had surgery a week later and I was forced to sit on the sideline and watch my brothers play the game I love. It was one of the hardest things I have ever had to do. It hurt so much knowing that I could be out there if it was not for such a freak accident.

Because of my injury, I was forced to miss my senior wrestling season as well. The feeling of wanting to play but physically not able to is the worst in the world. I felt sick to my stomach. I hated not being able to wrestle. I wanted to keep pushing, but my body would not let me. I stayed with the team and helped be the manager and team videographer. I did my best to stay involved with my team even though I couldn’t be on the mat.

Coming into the spring, I was so excited. I was going to be able to finish my senior year, get at least one more go at everything. When we began practicing it felt like heaven. I loved being back in a sport. I felt like me again. I was looking forward to playing alongside the kids I grew up with just one last time. Before we knew it, a pandemic spread across our globe like nothing anyone alive has seen. Word starting coming out that the season might be postponed, or even canceled completely. When the season was eventually canceled, I sat in my room and stared blankly at my wall, not knowing what to do or say. Our coach always says, “Control what you can control” and that’s what kept me going. I couldn’t do anything about what happened to my senior year. I continued to move forward and try to better myself through injury and adversity. I am disappointed my final year as a White Hawk ended like this, but I wouldn’t give up the past 14 years of wearing the Red, White, and Black for anything. I loved my time here and I have learned so much from all my coaches and teammates. Once a White Hawk, always a White Hawk.