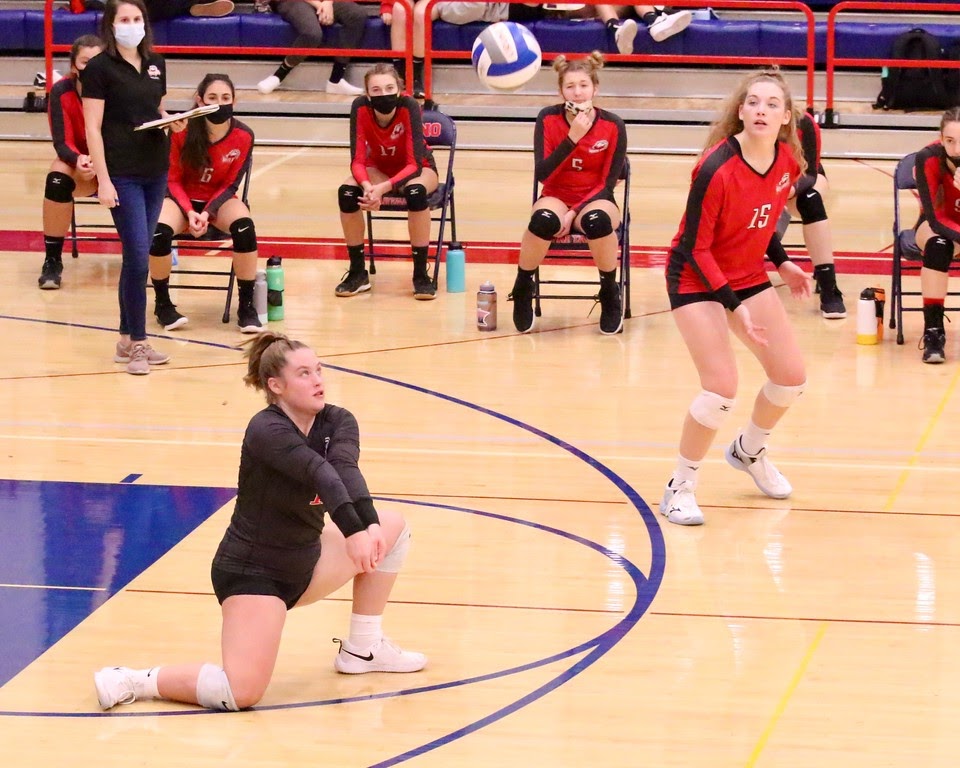 The White Hawks traveled to Spartan Country November 5, seeking revenge for a 5 set loss earlier in the week. The White Hawks had a tiny glitch in their system and started out slow. Although they turned it on to make the comeback, the Spartans held on for a 25-20 victory. Senior Sydney Turner continued to come on strong after returning from an extended absence due to an ankle injury. 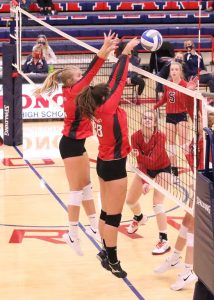 Set 2 saw the two teams settle into the back-and-forth scoring rhythm they established on Tuesday. You can tell both teams are well-coached as team play was always evident. Eventually our White Hawks forged ahead and never looked back. Senior Carissa Richie’s dedicated hustle was noticeable, sailing into her team seats twice for the sake of the point. The Hawks emerged victorious, 25-17.

The Spartans gave the White Hawks all they could handle to start set 3. The Hawks however, would have none of that. With solid contributions from seniors Stella Nagel and Greta Blanck as well as Junior Kennedy Schmidt; the Hawks rocked set 3 with a 25-19 victory.

Our Hawks started slowly in set 4. Steady net play from junior Simone Buescher and her fellow frontliners was not enough to help the Hawks climb all the way out of the initial hole they dug for themselves. In the end, the Spartans held on for a 25-17 win.

On to Jordan for a match between 2 AA schools, but FIRST…a huge congratulations to senior Carissa Richie on signing her letter of intent to play volleyball at Southern Utah University! What an incredible honor to a truly incredible, passionate and talented player. Go get ‘em, RICEY!

November 10th’s game in Jordan was moved to November 11th this week due to snow. The Hawks traveled to Jaguarville for an action-filled 3 set match. We played a day late…and our White Hawks showed up a dollar short for set 1. The Jags kept their momentum and prevailed 25-14.

In set 2, the Hawks seemed to come alive with multiple aces, celebrated by some impressive synchronized kicks from the bench. Junior Hannah Drill snuck in a brilliant 2nd hit to the Jordan dead zone for a point combined with multiple kills by Carissa Richie, and digs by freshman Kendal Richie. Even though we found ourselves Richie-Rich, the evenly-matched teams kept a tight game and Jordan took the set 25-22.

The final set found the White Hawks with a “White Hawt” 8-point lead—they did a great job trying to extinguish Jordan’s attempt to get it back, but the hits kept coming, ending with Jordan winning the set 25-22 and winning the match.